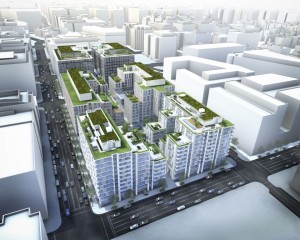 A new, mixed use low carbon masterplan, known as CityCenter DC, recently began construction this week on the ten-acre plot of land where the former Old Convention Center stood in Washington DC. CityCenter DC is one of the largest urban redevelopments in the United States and Foster + Partners has designed four new buildings as well as the master plan. The master plan brings together hotels, offices, apartments, restaurants and a wide variety of shops.

The area was previously enclosed by a large single convention center and now borders the main city axis of New York Avenue with views of the White House. The masterplan breaks up the site into smaller pedestrian blocks and forms new connections between the historic residential neighborhoods to the north and the commercial office developments to the south. The new design reinstates and expands on the original 18th century alleyways between the blocks and the walkways are planted with local flora and fauna for a historic feel.

The design is supposed to be human-scale in order to contrast the imposing scale of the surrounding blocks. The buildings gradually step down from ten stories high at the very perimeter of the site in order to frame a central plaza where the pathways and streets will converge. A new public park will be built in the northwest corner of the site which will also feature a landmark fountain.

The quarter will be pedestrian friendly due to the fact that the high density, mixed-use scheme will create a low-carbon environment. The master plan is also designed to achieve LEED Neighborhood Development ‘Gold’. The office and apartment buildings as well as the landscape are oriented according to the path of the sun and even incorporate green roofs in order to absorb water. This scheme aims to recycle 100% of the water used on site.

According to David Summerfield, Design Director at Foster + Partners, “CityCenter DC is one of the most significant urban developments in the United States today and we are honored to be designing a low carbon master plan for such a prominent site. Our design has evolved through detailed studies of the city’s climate and streets – the new buildings will integrate with their historic context and create a unique place to live and work, as well as a major new civic space and amenities.”