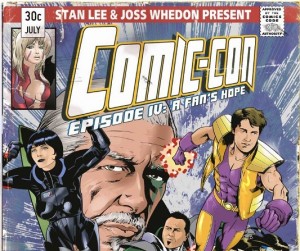 Comic-Con is every nerd’s dream vacation. It’s like a pilgrimmage to Mecca, a journey to the Holy Land, a trip to a galaxy far, far away! Whether you like comic books, video games, movies, toys, collectibles or just running around playing super-nerd dress up with a bunch of like-minded people, Comic-Con is the place that everybody can live out (mostly) their ultimate fantasies.

Sadly, Comic-Con isn’t as easily accessible for some people (like me) as it is for others. Luckily, for those of us who can’t go, we have Morgan Spurlock. Many of you may remember Spurlock from his documentaries “Super Size Me” and “The Greatest Movie Ever Sold”, but his newest film delves into the wonders of Comic-Con, getting a first-hand look at what it’s like inside the world’s biggest pop culture convention.

The documentary takes a look around the 4-day event, focusing on the real people who attend. Spurlock interviews some of the most famous Comic-Con veterans, including Kevin Smith, Joss Whedon, Frank Miller, Seth Rogen, Eli Roth and the legendary Stan Lee.

The perspective of the film focuses on five different Comic-Con attendees in hopes of showing people the real side of the event as opposed to Hollywood’s press coverage. The five different people include a fanboy aiming to propose to his fiancee but without enough time away from her to get a ring, an artist looking to immerse himself in a career of making the things he loves the most, comic books, another artist that has the opposite mindset, and a costume designer trying to showcase her work in hopes of being recognized by some of the industry’s professionals.

If ever there was a way to live the Comic-Con experience without actually going, Spurlock’s film is it. It is a film made by a fan for the fans, taking you deeper into the event than ever before. “Comic-Con Episode IV: A Fan’s Hope” opened in theaters this past weekend and is also available on VOD.