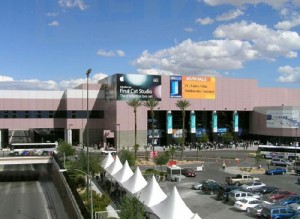 There is a little bit of a difference this time around. The concept that was originally put forth back in 2005 has been altered following the recession. The new plan will focus on renovating the 3.2 million-square-foot building as well as making over the neighborhood surrounding the convention center.

According to Senior Vice President of Operations Terry Jacinsky, “The district concept would feature potential improvements to roadways, sidewalks, streetscapes and iconic architectural elements for traffic and pedestrian corridors leading to the venue.”

In addition to that, Jacinsky stated that over the next six months officials for the Las Vegas Convention and Visitors Authority will meet with customers and organizers of the convention center in order to gauge their needs and determine priorities for improving the building. This was the same method used in the 2005 $890 million master plan. There isn’t a price point that has been established just yet though work could start as early as 2014.

This will mark the first renovation for the center in nearly 11 years, which may not seem like a long time to you until you realize that the center used to undergo changes every four years. Jacinsky said that it is important to keep the center “fresh” due to the fact that competitors across the country are trying their hardest to take conventions and trade shows out of Las Vegas and into their own centers.

The Trade Show News Network announced last week that Las Vegas retained its title as the number one trade show destination in the country with a total of 55 out of the top 250 shows occurring in the city. In addition to that, Las Vegas hosted more shows than the second and third place cities combined.