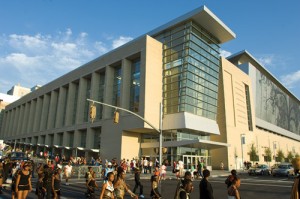 A feud in Raleigh, North Carolina over how to divide hotel and meals tax revenues officially came to an end on Thursday with a compromise by the city, Wake County and the local tourism industry. Raleigh City Council members agreed to delay plans for an expansion to the Raleigh Convention Center, though they did guarantee source money to cover cost of maintenance for the center.

In addition to that, Wake County agreed to turn over even more money from hospitality taxes in order to keep the center in peak condition. However, the county did come away with an additional $6 million to spend on sports facilities and other items that are deemed to be boosts to local tourism in the area.

Occupancy rates for hotels in the Triangle last year was 60.7%, which was a 4.6% increase over the 2010 numbers, according to the Smith Travel Research, which tracks the lodging industry. Also, hotel and prepared food taxes also increased 12.6% through the first 11 months of last year.

This new agreement won unanimous approval from the City Council and Wake County Commissioners. The agreement brought on a number of different provisions. Some of those provisions include:

The expansion of the center, which is inevitable, will be delayed and will also no longer be included in the Convention Center’s financial model.

Guaranteed maintenance for the center will be paid for at specified rates, ranging from nearly $2 million next year to almost $10 million by 2016.

The Greater Raleigh Convention Center and Visitors Bureau business development fund will receive $450,000 annually until 2022, so as to offset discounts given to groups that rent out the facility.

Wake County will receive $6 million by June 30 and will be based on a provision where the convention center will receive $2 for every $1 used to maintain the center.