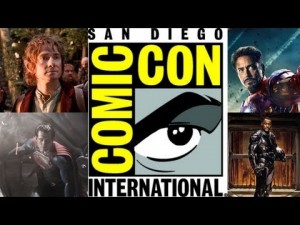 San Diego Comic-Con is in full swing right now, with nerds and geeks from all across the world making the pilgrimage to the nerd mecca with hopes of catching a glimpse of the next big thing in comics, superheros, video games, movies and just about anything else you could possible imagine.

This year’s event kicked off with a rather impressive spectacle, a free screening of Dredd 3D, the newest iteration of the British dystopian comic book character Judge Dredd, made famous by Sylvester Stallone back in 1995. According to Karl Urban, who dons the Dredd gear for this installment, “Working in this medium, it’s not like theater, where you give a performance or tell a joke in a play and you get an instant response, and you can gauge if what you’re doing is appreciated or not.”

Urban went on to say, “Quite often it isn’t until you go into this environment that you get an understanding of the appreciation that’s out there. It’s wonderful to see fans get such a kick out of meeting you.” Urban’s other Comic-Con type roles include Dr. McCoy in Star Trek and Eomer in The Lord of the Rings.

The San Diego Convention Center is jam packed with nearly 250,000 comic book, sci-fi, anime and video game fanatics for the four-day event, with plenty for everyone to see. Comic-Con has become so big, in fact, that A-list celebrities are now flocking to the show, promoting their movies or other products to the masses.

Some of the more talked about things at this year’s event include The Twilight Saga: Breaking Dawn – Part 2, The Hobbit: An Unexpected Journey, AMC’s The Walking Dead, Game of Thrones, Total Recall, Elysium, Halo 4, the 100th Anniversary of Tarzan, the 50th Anniversary of James Bond and Iron Man 3, just to name a few.

Yes, this truly is the biggest pop-culture spectacle the world has ever seen, not to mention probably the biggest convention every year. I will make it to Comic-Con one day, I will traverse the halls and follow in the footsteps of all my fellow nerds before me. It is my destiny.

Source: Daily News – San Diego Comic-Con: From Judge Dredd to ‘Twilight’, hobbits to zombies, there’s something for every geek