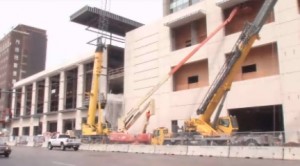 The massive convention center, hotel and arena project underway in downtown Cedar Rapids, Iowa is taking shape, and fast. Construction managers from Frew Nation Group and the city stated that this month would actually see some major milestones in the construction of the project. Based on actual, physical work and billing by contractors, the project is now officially 50% complete.

Ron Corbett, Mayor of Cedar Rapids, said that he is beginning to hear more comments from people now that the progress is becoming more apparent. The entire complex should be fully enclosed later this month. That will eliminate any weather issues for contractors doing work in the future. In addition to that, Corbett said that he hadn’t been inside the complex for three to four months and that he was impressed with how much work had gotten done in those weeks.

“It certainly has made a lot of progress in the last few weeks and months on the convention facility side of things to see the floors going in and how the teams have been working hard. Amazingly enough, ten months from now, June 1st, will be the opening. And we’ve got a lot of work to do yet,” Corbett stated.

The design of the new convention center, hotel and arena takes one cue from the U.S. Cellular Center Arena, that being the fact that workers have sawed through concrete to cut out a section of the round, bowl shape of the arena itself . That eliminated some permanent seating, though it will allow a larger, more recessed stage. In addition to that, more seats will go on the floor, which should increase concert capacity to as many as 10,000 people. Movable seats will be added for sporting events which will fill in the added space carved out for the bigger stage.

The convention center is definitely taking shape, allowing citizens, convention vendors and any organization looking to host at the new center to see exactly what it is going to look like, how big it is going to be and even how they could use it for their very own needs.