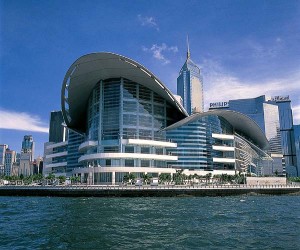 The Hong Kong Convention Center is located in one of the largest cities in the world, so it’s no wonder that it has one of the largest influxes of conventions in the world. During this last year alone, the Hong Kong Convention and Exhibition Center hosted a total of 1,224 events that brought in over 5.6 million visitors, according to the center’s management.

According to HML Managing Director Monica Lee Müller, “Over its 24 years of operation, the HML team has hosted 40,830 events and has served over 75 million buyers, exhibitors, visitors and guests. These events have contributed significant economic benefits to Hong Kong by generating spin-offs for related industries, creating numerous jobs and business opportunities for small and medium enterprises, and enhancing Hong Kong’s international image and reputation.”

Of the 1,224 events that took place at the convention center last year a total of 28 were from outside of the city with 17 being from international companies with local offices and 10 being from overseas organizers. Only one convention held at the center was from Mainland China. Among the events held, nine of them experienced their first time at the convention but a majority of them were recurring events. Of those, 35 of the events recorded double-digit growth in terms of gross exhibition space compared with their previous editions.

A total of 116 of the events at the center were exhibitions, 29 conferences, 87 entertainment and special events, 418 banquets and 574 “other” events, which includes corporate events, media conferences, seminars and small meetings.

Müller also added, “We take pride in attracting event organizers from around the world to Hong Kong. Their presence reaffirms that HML’s level of service delivery matches the highest international standards. The diversity of our event and client portfolio underscores the HKCEC’s position as a preferred venue for event organizers, and Hong Kong’s position as the Trade Fair Capital of Asia.”