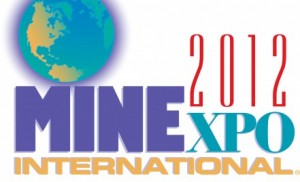 If there is a sector of business then you can bet your bottom dollar that there is a convention for it. Take the mining industry, for instance. While you may think that miners spend all day in dark tunnels mining precious minerals and whatnot, they do take time every now and then to attend a huge mining conference in Las Vegas known as the MINExpo.

MINExpo International 2012, which occurs every four years, recently opened its doors at the Las Vegas Convention Center where thousands of miners and mining industry professionals were on hand to talk the business, check out new equipment and learn all the new insider information on the mining industry from around the world.

Somewhere around 50,000 people from 112 countries were expected to attend this year’s event, spanning three days and including an 850,000-squarer-foot trade show with 1,860 exhibitors.

In order to prepare for the show, massive dump trucks, loaders and graders weighing as much as 200 tons when empty began moving into the convention center’s hall seven. Steve Moster, President of Las Vegas-based convention services company Global Experience Specialists, stated that the show was set up by over 1,300 workers from four different labor unions.

One of the most impressive exhibits was a train locomotive, a 4,000-horsepower Cummins engine and a Pro-Miner P&H Shovel Simulator that allowed operators to dig and dump dirt without getting dirty or being out in harsh weather conditions.

Moster added that the large vehicles were brought to Las Vegas in pieces, assembled in a parking lot and soft-welded together to be transported into the convention hall. He added that some are so heavy they need special boards beneath them to prevent damage to the asphalt below, and power lines have to be raised to bring them into the building.