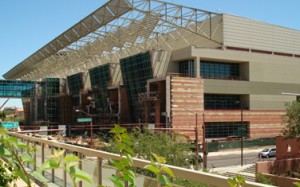 The Phoenix Convention Center just celebrated its 40th Anniversary by having a big block party for the entire downtown Phoenix community. The event took place from 11am until 2pm on Third Street between Washington and Monroe streets and included free food samples and a cornhole tournament benefiting the Phoenix Community Service Fund Drive.

Over 30 vendors were on hand, as well as businesses and nonprofits, from groups like the Arizona Diamondbacks and the Arizona Rattlers. Interim Director for the Convention Center Debbie Cotton, along with Mayor Greg Stanton, Vice Mayor Michael Johnson, Deputy City Manager Rick Naimark and Greater Phoenix Conventions and Visitor Bureau President Steve Moore were on hand to provide a brief presentation that focused on the center’s impact on the community and economic importance.

“I got to sample some great food that I’ve never had before, and also visit with some people that I didn’t even know had businesses downtown and offer some great services,” Chandler added.

The convention center has definitely been a booming industry for downtown Phoenix and is looking to do the same for 40 more years to come.