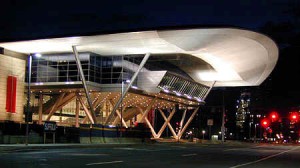 The Massachusetts Convention Center Authority recently put out a request for proposals to develop two 400 to 500 room hotels near the Boston Convention and Exhibition Center. Both hotels would be privately financed and mid-priced and would be built directly next to each other on D Street. In addition to that, each one would share facilities like kitchens and fitness rooms. The ground floor of each hotel would be designated retail or restaurant space available for lease.

According to the Authority, construction is expected to begin sometime in late 2013 with completion predicted in 2015. These two hotels are among seven other lodging facilities that have been approved by state Legislature to be built around the convention center. The Legislation recently removed the prohibition on hotel construction south of Summer Street near the convention center. The restriction was put into place back in 1997 to ensure that new hotel development didn’t have an adverse effect on South Boston neighborhoods.

It was also made known that the Seaport District is in need of an additional 2,300 hotel rooms to met the current demand. If the planned $2 billion expansion of the facility is approved  then the need for hotel rooms will grow to as many as 6,000 new rooms. In addition to these two new hotels, two additional ones are scheduled to open near the convention center by 2014. One is a 120-room Marriott Residence Inn, which is under construction on Congress Street. The other is a 135-room boutique hotel in Seaport Square.