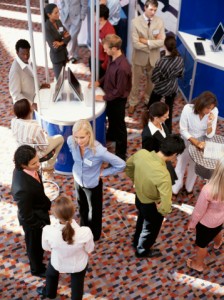 It isn’t always easy dealing with huge crowds of people. When you deal with convention settings, it can be very hard to differentiate yourself from the rest of the vendors. You have to remember that when you’re at a convention, there are plenty of other vendors there trying to do the exact same thing that you’re trying to do. When you are put in a sea of other convention vendors, you need to be ready to separate yourself from the pack. You need to be able to stand out. That doesn’t mean you should come wearing a clown suit, but there are ways  to plan ahead and get prepared for the convention itself.

One thing to prepare is your Sales Pitch. So many vendors can mess this one simple task up. For one, you should have it memorized and be able to ad lib a bit naturally. You need to take the potential customer into consideration as well. You have to think that all of these convention goers are in some type of hurry. Perhaps they got in late, or there is a specific showcase happening at a certain time. With everyone being in such a hurry, you need to have your sales pitch memorized to a point where you can get it done rather quickly without spitting up word vomit. Also remember to never open directly with your sales pitch! Be personable!

Now that you have your sales pitch prepared, the next thing to think about is your Booth itself. You need to view your booth as your home during the time of the convention. It’s an extension of your company for the time being. Make sure that your company’s name, what you represent, and what services you offer are pretty plain to see. Always make sure that when someone approaches the booth, they know exactly who you are and what you do. The more they know right off the bat, the easier it will be for you to strike up a conversation and gain a possible new customer. The other thing to think about is having something at the booth to attract people’s attention. Bright or shiny table cloths, a big display with lots of tablets or laptops ready for use by convention goers, or even a giant prize wheel. Things like that will definitely grab attention for your booth.

For Your Next Trade Show Technology Rental Check With Your Tech Travel Agent From www.Rentacomptuer.com Today At 800-736-8772

This last tip is something that could easily slip someone’s mind. Nevertheless, it’s still one that could help you more than you think. Chairs! That’s right, chairs. It sounds so basic, but consider the facts here. Many people that go to a convention are going to be on their feet for hours upon hours. Walking, standing, running, and  everything in between. If you are able to snag a couple of chairs from the convention center itself or even bring some folding chairs from home and line them up by your booth, things will appear much more inviting. Since many of these convention goers are on their feet for hours at a time, having the chance to sit down and relax is always attractive to them. Let them come, sit down and take a load off for a second. While they are relaxing, it’ll be much easier for you to approach them, make a bit of small talk, and swoop in with the sales pitch.

There are plenty of ways to help make sure that you’re ready for your next trade show. Whether it be through renting your tech or just being prepared for the crowds of people, don’t be caught off-guard at your next convention!