Gaming Nerds Rejoice! E3 Is Right Around The Corner!

I get excited for very few tech conventions every year. I mainly only pay attention to the main ones that involve the biggest names in the industry at that time. One event that I’ve been following, for years now it seems, has always captured my attention. I’ve come to terms with the fact that I have a gaming addiction. What is my biggest fix you may ask? Why the Electronics Entertainment Expo of course! E3 for those of you who may not know, is the biggest gaming convention of the year. This is the convention that every gaming nerd across the world pays attention to, and tickets to enter into this particular conference are far from cheap. If you are able to get into this event, know that I’m very jealous of you.

E3 is, as I said before, the BIGGEST gaming convention in the world. Think of Apple’s WWDC but with video games instead of iPads and Macbooks. This event takes place every year in the summer time. This is where all of the gaming industry’s finest come to show off what they have to offer currently, and what they will offer in the future. We all know the top three dogs that will making their appearance at this years event, and we can expect the gloves to come off as well.

Companies like Sony, Microsoft, and Nintendo are constantly battling for gaming supremacy. If you are unfamiliar with what these companies offer in terms of the gaming market, I can offer a quick refresher course. Sony works with the PlayStation and is currently pushing the winning PlayStation 4. Microsoft developed the Xbox and has been working to outsell the PS4. Nintendo has been in the gaming market longer than both of these companies, but is constantly being left in the dust by the more “hardcore systems”. They offer the Wii U as their current next gen system.

Each of these brands will be throwing their very best in the ring at this year E3 event. This conference plays host to many different tech companies, gaming websites, and game developers. The vendors at this event offer only the finest gaming equipment and gaming swag for you to carry out. The only thing to worry about when working this convention is keeping the attention of the patrons. This event will only be from June 10-12 of this year, so vendors need to make the best use of that short time span. Everyone will be running around trying out the newest games and console attachments before their released, so vendors be ready to give the best pitch you can! 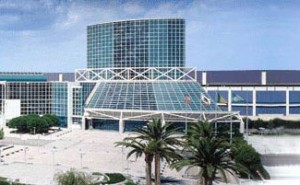 This years event will be held at a familiar local; The Los Angeles Convention Center in LA, California. This is arguably one of the biggest, most notable, and most used convention centers in existence currently.

There will be press conferences for all three major console creators; Sony, Microsoft, and Nintendo. We should expect some pretty crazy things at this years E3. It’s going on a year anniversary for all of the next gen consoles. Now that the new systems have been out for a little while, be ready to see plenty of developers working on games geared towards the new platforms. Also, expect the console companies to offer more insight on their new consoles, including new exclusive titles. We may even see our first loook at slim models!

The gaming industry is very lucrative, so even if you aren’t into gaming, this is a convention to definitely pay attention to!

Are You Looking For Audio/Video Equipment Rentals For Your Next Convention? Contact Your Tech Travel Agent At 888-802-0102