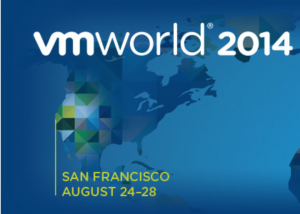 Nothing says tech nerd quite like information technology. Now realize that I’m not talking down about information tech at all. I embrace my tech nerd side. Even though I claim to be quite the techie, for a while there, there were still some things that I’d yet to understand. Mainly, the Cloud. I had no idea what it what was or what the purpose of it was either. I did some research, and over time I was able to understand what everyone was talking about. The fact is that we are becoming more and more of a virtual world. We are striving to access our information for many different venues. There are some who recognize this fact, and have since decided to make a convention that not only better explains it, but also welcomes new technology to help it grow!

VMworld is a conference hosted by a company called VMware. Unfamiliar with VMware? That’s ok. They might not be the most talked about company out there. VMware is a company that specializes in cloud and information virtualization software and services. Although the California based company was founded back in 1998, they’ve still not exactly become a household name. Since the company itself is based around the idea of cloud and virtualization technology, you should be able assume what VMworld consists off. Yup! The same ideals, but utilized in way that can help move your business forward with the speed of today’s technology.

There’s a lot to be offered at this years conference. Cloud-based technology and vitualization technology aren’t exactly well known topics or practices. It’s just recently started to become a more prevalent feature in modern technology. With that being said, if you attend this years event, you’ll be met with a massive wealth of information. Do you want to learn about building a private cloud or talk about ways to manage specific leveraging with the public cloud? They have that covered. Plenty of different cloud-based tech companies will be attending this year as well to talk about what some of the best business practices are when dealing with virtualization tech. After all, the main goal is to use this technology to help further the business. Any way that you could think of involving the cloud and virtualization to help move a business forward and expand, this years VMworld has got it covered.

If you’re unsure as to what cloud technology is, just know that it can be a huge help when dealing with storage. It’s way to easy these days to have too much information, documents, reports, etc. to store and still have enough space on your computer for other facets of work. By saving whatever you need to save to the cloud, you have it in a private storage system that either only you can access, or on a shared public storage space that different people can access. Naturally you can see where this type of technology could really speed up communication and, in turn, increase business productivity.

Are you interested in checking out this years conference. If so, make sure you are at the Moscone Center in San Fransisco, CA from August 24th-28th. This happens to be one of those conventions that really looks to move businesses forward by embracing new technology and its features. Cloud-based technology is becoming more and more prominent as the months go by. Make sure you’re not left behind when it really blows up!