BlizzCon 2015 Is Happening In Anaheim 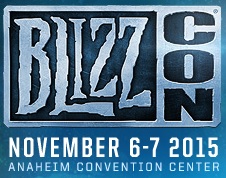 World of Warcraft players are going to be pretty busy over the next month. Of course, the most important thing that will keep them busy is BlizzCon 2015, Blizzard’s annual convention for everything the company has to offer. This year’s event will take place November 6th and 7th at the Anaheim Convention Center in Anaheim, California.

Blizzard always makes BlizzCon an extravaganza and this year’s event will be no different. Linkin Park will be the entertainment for this convention while Murkidan, murloc Illidan is the World of Warcraft item. In addition to that, World of Warcraft players and fans will be able to see the world premiere trailer for the World of Warcraft movie. Some images of the film have hit the internet and fans are buzzing about the full trailer.

There are also some in-game events that WoW players can participate in. Day of the Dead is currently going on (it ends November 3rd), which allows you to purchase Orange Marigolds from Chapman and use them, which will allow you to see otherwise invisible spirits waiting in graveyards. Darkmoon Faire has returned and goes until November 7th. This is a good time to test your speed and agility on racing mounts and your best opportunity to achieve heirloom gear. The Pilgrim’s Bounty will run from November 23rd until November 30th and will allow you to reflect on your journeys and good fortune while also sharing food and stories with other players. November 23rd is also the 11th anniversary of the game.

While WoW is definitely the focus of BlizzCon 2015 you can expect to see information and reveals about Blizzard’s other big name products, including StarCraft. There will undoubtedly be a lot of information about the third and final chapter of the StarCraft 2 series Legacy of the Void, which focuses on the game’s mighty Protoss race. BlizzCon will be taking off this weekend and there’s something for every Blizzard fan to enjoy!