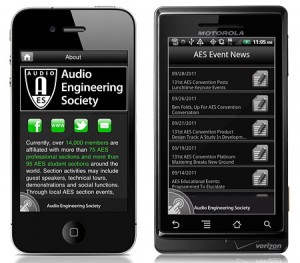 Conventions, for the most part, are huge events with so much going on that it wouldn’t be hard to miss something, not understand something or simply get lost in all the hustle and bustle of the convention floor. However, The Audio Engineering Society has developed an app for all attendees of the upcoming Audio Engineering Society Convention, set to take place from October 20 to October 23 in New York, to help with all their convention going needs.

The app is completely free and is available for Apple iPhone users via the Apple App Store and Android users via the Android Marketplace. The app itself offers free news, show photos, floor maps, a list of all the show’s events including sessions, videos, podcasts and even a live Twitter feed. In addition to that, the app is also expected to be updated regularly, allowing you to have all the information in real-time so you never miss a thing.

In addition to that, after the show has concluded, the app will remain active and become a permanent link to the Audio Engineering Society as well as all of its events. Once the next show comes around, the app will already be installed and ready to go for that event, making your experience all the more fun, engaging, interactive and profitable.

According to the Audio Engineering Society’s Webmaster Steve Johnson, “A huge percentage of our members rely on smartphones to stay organized and get the latest AES news.” This app will be a great way for convention goers to stay on track while at the show and the ability to bring up an accurate map of the show floor on your smartphone or tablet is one of the most convenient things for a convention goer. Hopefully more convention hosts learn from AES and design their own app for convention goers in the future.