Expansion to Henry B. Gonzalez Convention Center Is Approved 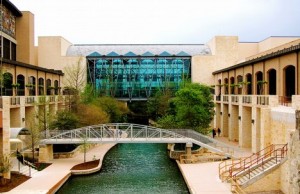 The San Antonio City Council has approved giving a $304 million contract to a joint venture involving Hint Construction Co., Zachary Construction Co., Populous Inc. and Marmon Mok Architects for the new expansion planned for the Henry B. Gonzalez Convention Center. The expansion itself will include 280,000 square feet of brand new exhibit space as well as the construction of a 55,000-square-foot ballroom.

According to San Antonio Mayor Julian Castro, “This project will put San Antonio at the forefront of the nation’s convention industry for many years to come and help lead a renaissance at HemisFair Park with enhanced green space.”

Populas Inc and Marmon Mok Architects have already worked together on a number of different projects over the last 20 years, including the Alamodome, which was constructed by Hunt Construction Co. Sheryl Sculley, City Manager for San Antonio, has stated that the expansion will improve the city’s ability to compete for more conventions.

The Henry B. Gonzalez Convention Center is one of the most popular destinations for convention goers and customers of Rentacomputer.com, which does a lot of business with technology rentals at the Henry B. Gonzalez Convention Center. Rentacomputer.com delivers technology rentals to the entire San Antonio convention complex, as well as other meeting facilities in the area, like Hotel Contessa, one of the favorite destinations for Tech Travel Agents.

Convention Center rentals allow you to manage expenses while also having all the latest and up-to-date pieces of technology available. Local delivery and installation as well as 24-7 customer support are just some of the many features that you can count on with a technology rental from Rentacomputer.com at the Henry B. Gonzalez Convention Center or any location in or around San Antonio, Texas. No matter what you need, where you need it or when you have to have it, Rentacomputer.com can deliver.