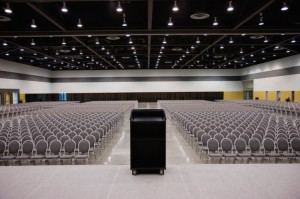 Conventions. Conferences. Gatherings. They all serve the same purpose, amassing a large group of people to a centralized location in order to express mutual interest in a particular subject. Mind you, it sounds extremely boring when I explain it like that, but that is what it is in layman’s terms. The one thing that most people fail to realize, should they attend a convention, is just how much goes into planning and setting up a convention. It’s more than just the content of the conference and the venue. It’s actually quite a lot more than that. Whether you are attending an anime convention, a comic book convention, E3, or Samsung’s Unpacked Event, there is a lot more than just the subject matter that makes up the convention.

Almost every type of conference requires technology that can’t always be bought from Radio Shack, i.e. lights, presentations, sound systems, speakers, microphones, projectors, projector screens, and more. These elements are essentially the back bone to the convention. As long as that is in place and set up within the venue, you have the makings for something truly incredible. I know for a fact that most of the conventions you read and hear about have to rent everything that they have within the convention venue. It’s the same scenario with the vendors as well.

All of the people that you see are selling products or services at these conventions. Every single one of them is sent in as a representative of their respective companies to attempt to make sales. As convention goers walk around and enjoy the festivities, many companies view this as a perfect opportunity to increase sales. You see their booths everywhere as well, if you have been to a convention that is. Any tech convention you see or attend is going to have quite a few mobile devices at each booth. Laptops, smartwatches, smartphones, tablets, computers, and more all may line the walls at a tech convention. As the convention fills up, companies have to make sure that there are enough tools and accessories to go around and that they can be used properly. A business may lose a potential sale or service signup if their stations can’t be readily accessed. There needs to be enough product to go around.

Let’s face the facts here. Purchasing 20 iPads at one time for just ONE booth at an extremely large convention is going to be a bit pricey. This is where rentals come into play. All of these vendors, and the convention itself, have a lot to take into consideration should they want their event to be something worthwhile.

These conventions are all about the convention goers, but also about minimizing spending and maximizing profit. The easiest way to do that is to rent the equipment you need. After all, there is a lot more to a convention than just buying your ticket and going. If you ever are involved in the production of a convention, it’s best to be educated on it.

For All Of The Technology You Need At Your Next Trade Show Contact www.Rentacomputer.com Today at 800-736-8772