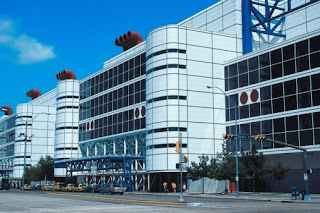 The George R. Brown Convention Center opened on September 26, 1987 on the east side of Downtown Houston. The convention center was named in honor of the prominent Houstonian George Rufus Brown who was an entrepreneur, civic leader and well known philanthropist. Browns own Texas Eastern Corporation even donated 6 of the 11 blocks required to build the center which is now operated by the city of Houston. The sleek 100-foot high red-white-and-blue building was completed with a price tag of $104.9 million, requiring nearly 30 months of construction and more than 1,200 workers which replaced the then obsolete Albert Thomas Convention Center.

Today the George R. Brown Convention Center is among the top 10 largest convention centers in the nation netting nearly 1.2 million square feet of exhibition, meeting and registration space which attracts many visitors year round. Some of the more notable conventions hosted at the GRB are the International Quilt Festival and International Quilt Market which draws more than 50,000 visitors once a year. The 2004 and 2008 Texas Democratic Convention were also held at the center.

The most recent convention held here in Houston was the 2010 Shell Eco-marathon which was held just a few weeks ago on the last weekend of March. College and high school teams from around the world designed, built and tested vehicles for maximum fuel efficiency at the Discovery Green, a 12 acre entertainment park across from the convention center. The 2010 event marks the first time the Shell Eco-marathon has taken place outside Southern California since it began in 2007.

If you are planning to exhibit in Houston and are interested in George R. Brown Computer and Audio Visual Rentals from well known and trusted professionals, contact your friendly Tech Travel Agent or call 877-422-1907 to get a quick and easy quote for Houston computer, audio visual, and convention technology rentals.